Well, spent this past weekend fishing up in truckee with Brent Dawson from War Path flies.  Brent is commercial fly tier from the Bay Area.  He spent many years working in the San Jose Fly Shop and honing his skills as a tier and fisherman around here in California.  He does some great streamer patterns for trout and bass, but mostly specializes in salt water bugs these days.  Check out some of Brent's bugs out at www.warpathflies.com.  If your going on a trip somewhere exotic, Brent can most likely tie you up a specialized package for your individual needs.  His salt water patterns turned out to be my go to flies for Panama, Baja, and even worked in the Amazon.  Next month Brent is accompanying me to Mongolia for a our return expedition to dig even deeper into the Mongolian Out back.  Wait till you see the creatures he's been making for the trip!!  His Taimen flies are insane!!
Our outing started with a warm up float down the upper section of the Truckee.  Brent fished fished his olive jig head leach most of the day.  He striped and wiggled it through all the good pools and riffles producing many nice fish.  I came in behind and cleaned up on some nymphs.  The Caddis pupa turned out to be super effective as usual for this time of year. 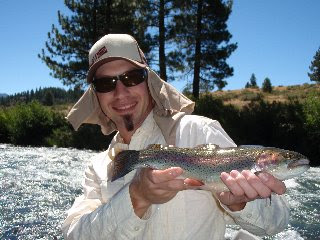 After fishing, we went over to Richard Anderson's house for his annual Cal Fly Fisher BBQ.  It's always a good time to see the Truckee crew and catch up on all the haps.  Richard doe's a great job with Cal Fly and has allot of support from the community. 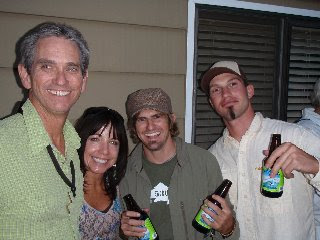 After the BBQ, Brent, Tim Haddon, Dave Lass and I went over to Andy Burk's house for the after party.  Tim gave Andy a bottle of Tequila for his birthday.  It was also Brent's birthday, so we proceeded to celebrate. 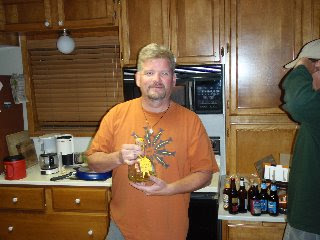 Brent bought one of Andy's paintings as a birthday present. 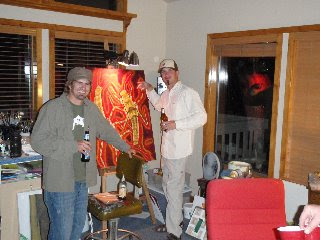 After a rough start the next morning, Brent and I floated the real water on the Truckee.  The lower sections are my favorite.  There's some good swimming holes, some nice white water and decent fishing.  It's tougher to get fish the lower you go, but the possibility is always there of getting some really nice fat wild brown and rainbows. 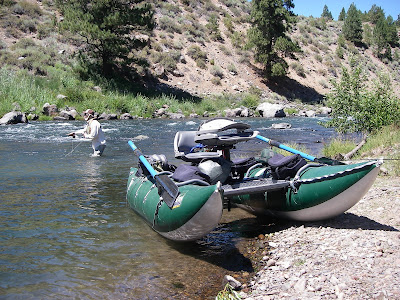 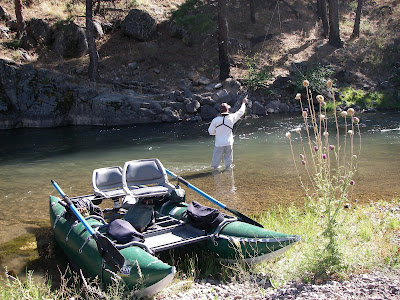 All and all, it was a great weekend! Thanks for the flies Brent!!!
Posted by Burl Productions at 9:21 AM