As some people may or may not know, the Hawaiian Islands are home to some of the biggest bonefish in the world. The island of Oahu has some of the best flats to try and sight fish to these giant fish that can reach over 15 pounds. Unfortunately Oahu also has the highest population of people out of any of the islands. So many of these flats could be considered urban due to the amount of traffic they see. These fish are big smart thugs that have ruled these small flats for many years. They are not easy to catch. But when you do, it can be a fish of a lifetime. When Coach Duff gave me a call and invited me over to chase around these trophy bonefish with him, i knew i shouldn't miss this opportunity to get a true trophy Pacific bonefish on film. Big thanks to Coach Duff's Hawaiian Bonefishing as well as Blake McHenery and Brent Dawson for a fun week. 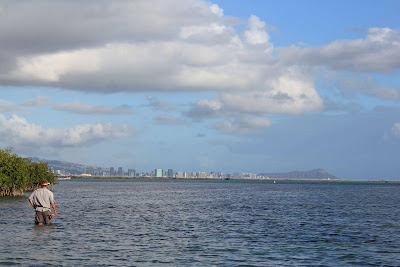 I arrived in Hawaii on Veterans day. The air was thick with pride for our county and I could feel the heritage that Oahu has played in serving our armed forces. Coach Duff is a retired Marine who severed our country for many years. After several tours with 2ed Force Recon in Somalia and the Middle East, Duff has seen more than most folks could ever imagine. His life story reads like a movie script for an action hero. These days Duff is a family man and a dedicated fly fishing guide. I was honored to spend some days with him listening to his stories and stalking these magnificent bone fish. Because of his stent in the Armed Forces, Duff has special clearance to launch on and fish near the military bases on the island. This flat is near the famous airstrip that was attacked during the raid on Pearl Harbor. As we drove by the buildings that still brandished bullet holes from the 50 cal machine guns I felt a cretin feeling of country that one only gets when in the presence of something much greater than themselves. I was proud to be in the Truck with someone who had fought so hard for the ideals we believe in and helped preserve the lifestyle i get to enjoy. 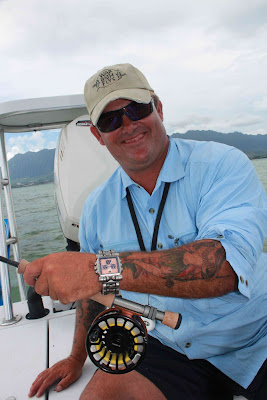 While walking the flats near Hickman i looked down in the sand and noticed a ring sitting there. I picked it up to check it out. It was a titanium wedding band. No doubt it had probably belonged to a solider. I slipped it on. It fit perfectly on my ring finger. I could feel it had energy. Someone else's energy. I began to speculate how it got there. If some happy swimmer dropped it or if some pissed off Solider threw it out there. Either way i felt like Froto taking on the burden of this ring. i quickly took it off and put it in my pocket. I removed it from the Ocean but left it in Hawaii where it belonged. I just simply didn't have time to take it to the volcano and destroy it. We had fish to chase! 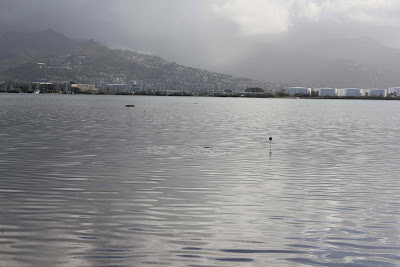 A nice tailing bonefish on a calm hawaiian morning. At one point the rest of the crew was off a ways away and i stayed behind to film some swimming crabs. All of a sudden i was sourounded by 3 huge fish tailing right next to me. Unfortunately i didn't have a rod with me. I was armed with only a camera. It reminded me of the wild Turkey's back home. When your just out for a walk or hanging out in the yard, they come right up to you. But as soon as you get a weapon your intentions change. All of a sudden the Turkey's split. Just like a herd of Gazelle can sense when the lions are hungry , so do the bonefish sense your intentions. 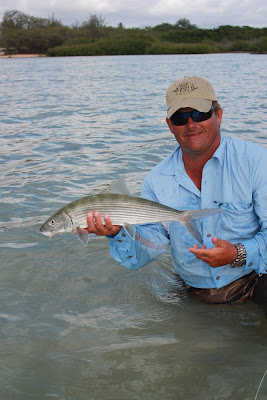 Coach Duff with a nice fish. Not easy to catch buy very rewarding when you do.
Posted by Burl Productions at 3:29 PM

Yes a very fun and memorable trip with Coach, Blake, Mikey and I. Man thanks Coach for al your Armed forces work and teaching me many new aspects of Bonefishing. You are a great man, father, husband and friend. Thank you again for the great trip. Oahu is a beautiful cultural experience and the Coach and his guiding make it all the more fun to enjoy the overall experience.

Yes a very fun and memorable trip with Coach, Blake, Mikey and I. Man thanks Coach for al your Armed forces work and teaching me many new aspects of Bonefishing. You are a great man, father, husband and friend. Thank you again for the great trip. Oahu is a beautiful cultural experience and the Coach and his guiding make it all the more fun to enjoy the overall experience.
Cheers,
Brent