Summer on the East Carson. Hot days, cool nights. Sporadic hatches and prolific wildlife. Bears and snakes and eagles. It's a beautiful way to spend a day. It's getting harder and harder to find solitude on the East Carson though. These days if you want to get away from the crowds you have to hike your butt off over hot rocks, through willow thickets and down dusty trails. And even then, you might still run into some other anglers. On one fine mid summers day Jared Beer, his dog Grizwald and i decided to go for a little hike on down the rivers. After some 4 wheeling to one of our favorite spots, we headed off down the river. As luck would have it, we were the first people to fish that spot for the day. I regimented myself to only fishing with the hopper. Didn't really care how many fish i got this day, just wanted to see one grab that big chunk of foam. We thought for sure it was going to just be game on. Instead, the fishing was slow. We covered pool after pool with nothing more than a couple refusals. Finally we reached one of my favorite pools on the river. It was getting late in the day and the shadows from the big Jeffery pines were creeping down onto the water. I crept to the rivers bank through the willows and roll cast the hopper out onto a slow slick at the back of the pool. I knew there was a big boulder in that spot the fish like to sit around. I watched the drift very carefully until it started to swing. Just then i looked away at Jared on the other side of the river. As i lifted my rod i heard a huge splash. I looked down river just in time to see a huge tail roll out of the water as a massive fish tried for my hopper. OOOhhh. it was a biggin. I sat and waited for about 5 minutes before i cast again. This time the hopper drifted perfectly back over that same area. Wham, with a much smaller splash this time, a huge beak poked out of the water and inhaled my foam hopper. I lifted the rod and he was on. After a nice strong fight, i managed to land one of the most beautiful dry fly caught fish of the summer, for myself, on the Carson River. Managed to snap a few shots before he swam away. Shortly after that fish, Jared hooked into a nice fish on some nymphs in the same pool. I came running up expecting a huge bow. Instead it was a big old Whitey which turned out to be his big fish of the day. Griz gave it a kiss and off it swam too. I'm sure the fish spent the rest of the afternoon down there in the depths swapping abductions stories. I spent the rest of the evening contemplating which fish exaggerated the most about how big the humans they saw were. 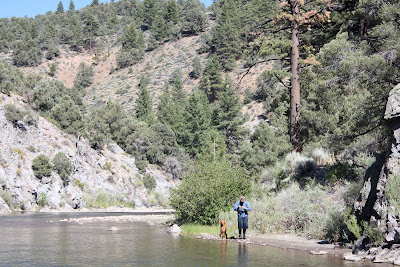 Jared and Griz on the EC. 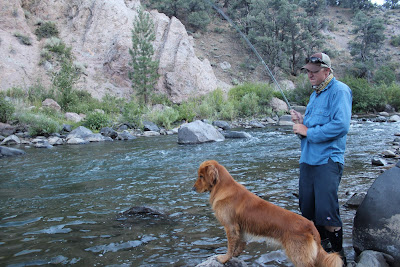 Griz standing at attention, waiting to greet the fish. 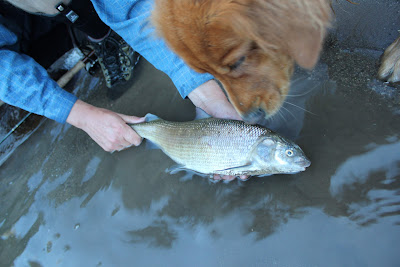 Even Griz was reluctant to lick a whitey. 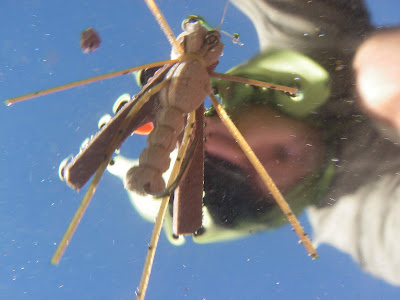 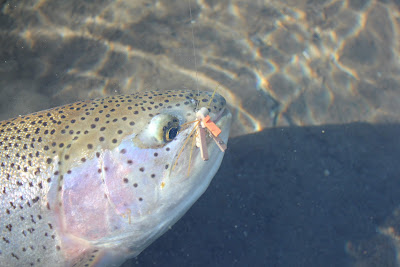 Does the trick again. 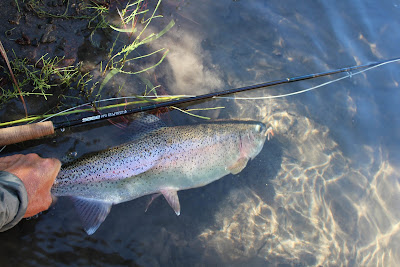 Beautiful Carson bows. I kinda have a soft spot for MW and that is a nice speciman for sure.

That whitefish is awesome.

Makes me miss CA, the best fishing place in the world.