Brent and i paddled into a pool where Peter, Gen, Paul and Jeff were already fishing. I could see them all lined up down the back, but couldn't tell what they were doing until it was to late to pull off before going into the rapid that lead into the pool. Brent got a little squirmy on the oars and ended up going right down the main tong of the pool. I think Peter and Gen had already been fishing the pool for a while but Peter seemed aggravated. Like Brent had just spoiled his water. We pulled over in the tail out to watch them fish for a bit. Just then, Peter got in his boat and started smacking the oars around on the water right over the meat of the pool. Like we already wrecked it, so he better just go ahead and seal the deal in case we had wanted to fish there. Which i didn't. I just wanted to watch and film and maybe see if i could spot fish for them. Paul followed suit and paddled off down river too. Either way, i felt like we better give them some space, so i told brent we were going to get out for a bit and just chill. I told him to get in where he fit in. Or in other words, waters all yours dude, pick your spot. He dilly dallied around for a bit then headed up into the bushes to take a growler. I figured the pool looked like good water, so i better make some casts. My first cast with a heavy streamer Brent ties called the toma hawlk, was right into the head of the pool so it would drift for a bit and sink into the sweet spot before i started the swing. Just about the time i thought the fly would be getting close to the bottom, it stopped. I reefed back hard, but thought for sure it was a snag. Just in case, i always wait an extra moment before i give slack or start pulling to hard. Just then, there was a massive surge in the line. I knew it was a big fish right away. He proceeded to pull out all the stops. He did the down and dirty head shakes, the gill flare tail walks, the massive gator rolls while pumping his jaws. I managed to run over 100 yards down river on some loose, sketchy rocks and finally get some control over him near the tail out. When i finally wrestled him to shore, the fly just fell out of his mouth. It was an epic catch and turned out to be the fish of the trip, maybe the fish of my lifetime. 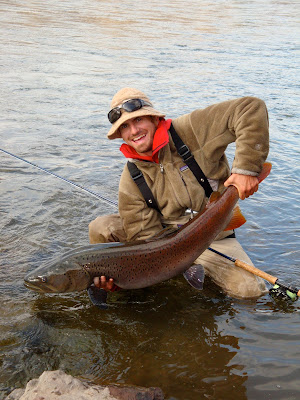 Posted by Burl Productions at 12:53 PM

thanks for the reminder not to be taking growlers when I should be fishing.