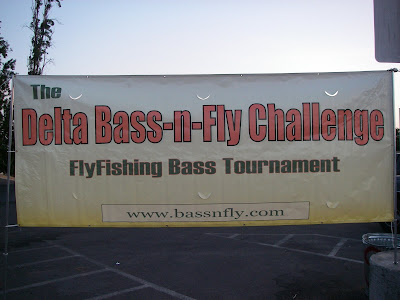 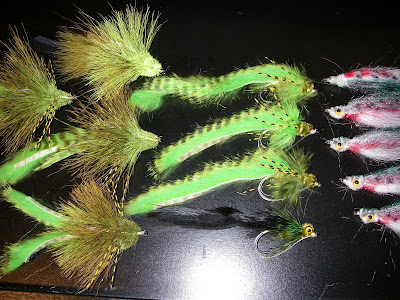 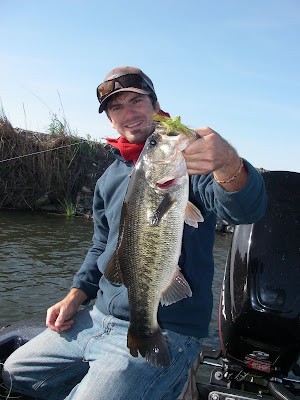 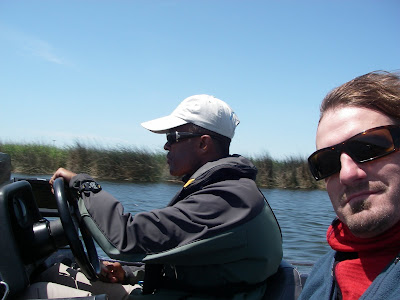 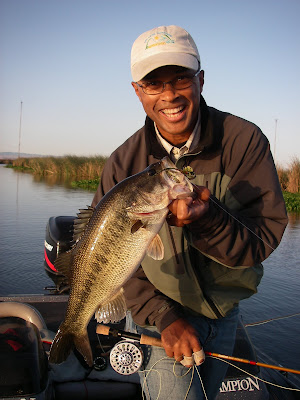 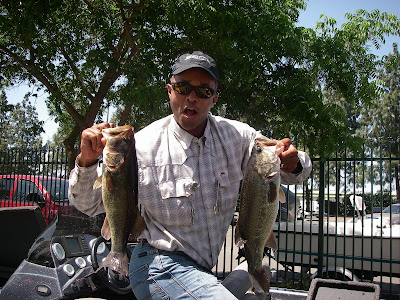 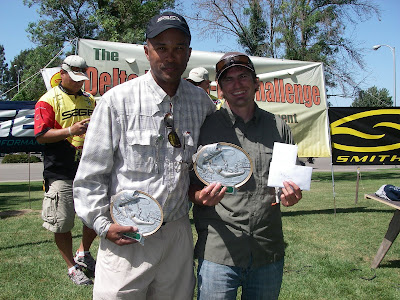 Good enough for 3ed place!!
To much of California, Spring time means Bass fishing!!  That's right folks, it's time for the 2ed annual Bass N Fly Challenge down in the Delta.  This years event was another great success. There were over 30 teams competing and the Team Bass N Fly Team did a great job of organizing and running the event.  The fishing was tough this year though.  Not as many fish were caught as last  year.  The wind was blowing and the fish were slow on the bite.  I fished this year once again with Robert Johnson from the Save Delta Fish.com.  Last year we had gotten 4th, so this year we were out to beat that.  We had a wild ride to say the least.   Robert had been putting in several days pre fishing and really knows the Delta fishing well.  I was relying on him to know the spots.  I tied up some flies and knew i could make the shots if Robert put us on some fish.  I showed up the day before the event to pre fish.  We went all over the place looking at some favorite spots and exploring new water.  It was a decent day, but only yielded a couple fish.  At the end of the day on our run home, Robert's compressor on his motor blew and we had to limp as far as we could with the electric motor before Rick and Charlie Bisharat came out to get us and tow us to John Sherman's place in Diso Bay.  After a long night of shuttling cars we were able to get his boat out of the water and Robert was able to talk his good friend Pat into loaning us his boat for the tournament.  So after a few hours of sleep, we were back on the water in time for the event.
The highlight of our day was watching some Black Bass feeding on bait fish in some heavy weeds.  They were going crazy on these fish.  Tails splashing out out of the water, bellies rolling, flopping on top of the weeds.  It was really cool to watch.  We heard them feeding and headed over there for a few cast.  We ended up spending the next 3.5 hours fishing to those fish. Never got the big ones we saw, but ended up pulling a few fish in the 3-3.5 lb. range.  Got a couple smaller ones too and that was our 5 fish for the day.   We tried another spot for the next couple hours but with no more fish to the boat.  After some trouble with the motor, we didn't think we were going to make it back to the dock, but somehow we got it going and made weigh in just in time.  Turned out the fishing was slow for everyone.  Our five fish were good enough for 3rd place.
Big thanks to Robert Johnson, John Sherman, Charlie Bisharat, Rick, Keith, K.D., Ken Hanley, Steve Potter, Brent Dawson, J.R., Toby, Jeff Currier and everyone else who showed up and and helped make this event a great success.
Posted by Burl Productions at 2:45 PM 4 comments:

From its headwaters in the high Sierra to the San Joaquin Delta, The Mokelumne River is a shining gem of nature. A National Wild and Scenic River Designation will ensure this precious resource is protected for future generations of fish, wildlife and people by preventing new dams and diversions on more than 37 miles of free-flowing river. Please get involved today. Write East Bay MUD and tell them you don't support the Pardee Dam Expansion. Also go to foothillconservancy.org and sign the petition showing your support for a Wild and Scenic Designation.

Mokelumne River - Wild and Scenic from Mikey Wier on Vimeo.

A small gust of wind disturbs the trees. The sun glistens through the individual crystals of air born cold winter snow like a thousand diamonds in the clear blue sky. The only sounds I hear are the breeze in the tree branches and a crow in the distance. I walk to the edge of the slope and look down. All the lines are there just waiting for me to carve them.

The backcountry around Hwy 88 is my winter playground. For me, it’s all about the backcountry. It’s a totally different experience than riding a resort. I love looking at a fresh slope covered in snow and getting to pick whatever line I want. Not just racing for a fresh line at Kirkwood or looking for the last stashes. It’s all about getting to choose the cleanest line, the most challenging line, or the most aesthetically pleasing line for filming or photos. In the backcountry I get to look at the slope and choose whatever line I want. Each mountain is a wide-open canvas just waiting for us to draw on it.

My favorite way to experience the backcountry is on foot. I was one of the biggest holdouts but eventually broke down and bought a snow machine about 5 years ago. Most of my friends had them and as a professional snowboarder I justified it as a work expense. For a while there, none of the filmers or photographers I knew wanted to hike. If I wanted to go build a jump or ride some lines with the film crews, I had to go out on a sled. It became my guilty pleasure. I love the access, but hate the exhaust and noise. I had always preferred hiking for my turns. I love the quiet of the backcountry. When I hike for it, I really appreciate each turn. It’s more like surfing. You have to work for the ultimate ride. Also, there is only so many places a snowmobile can go. Lots of the places I like to ride are in wildernesses or just plain to hard to get to for a snow mo.

This season I’ve been getting back to the roots and leaving the gas guzzler at home. Snow shoeing used to be my preferred method but now split boarding has opened up the backcountry for me in ways I had only previously imagined. I have always admired the skiers and been jealous of their ability to skin deep into the backcountry. I by far prefer the feeling of riding a snowboard in powder though, so it had always been worth it to me to just carry my board out there. Now with the new split board kits I was able to turn one of my favorite Lib-Tech boards into a backcountry vehicle. I love the new banana rocker. It floats in the powder and the magna-traction helps me keep an edge in even the sketchiest of billy goat lines. Patagonia’s winter clothing has also made journeys into the backcountry warmer, more comfortable and more enjoyable for me.

I rode less this year then most, but still managed to get in all of the best days. I’ve patterned my life for the past 15 years to be able to ride the best powder days in the winter. These days with more responsibilities and limited time I have to make the best of my days in the backcountry. This means finding good lines and riding them with precision. This season I got to ride some of my old faithful spots and also made it into some new terrain that I had been scoping out for years.

This season I took along my camera and was able to snap some photos of a few of my favorite lines. Most of our hills are pretty short around here. I try to look for lines with at least a couple features to them. It’s nice to get a few good turns, a good windlip slash, a rock drop or two and or a good chute. I really like trying to imitate surfing while I snowbaord in powder. I try to find lines that I can ride like a wave. Like the one with an air drop in, set up turn to check some speed, chute (barrel), shoulder slash and exit. If I can’t do that, then the best feeling is to just going fast and catching air.

I’m sharing these photos in hopes they inspire you to grab those snow shoes, build a spit board or just cut a bread crate in half and strap it to your feet and go enjoy the backcountry without contributing to harmful carbons in our atmosphere that may lead to us not having snow anymore some day. 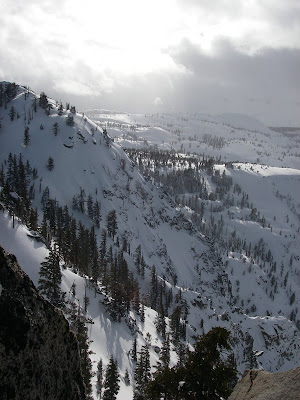 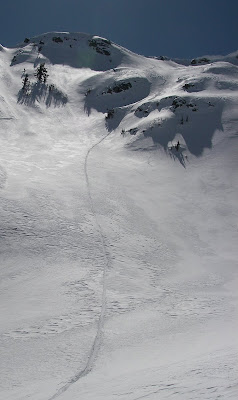 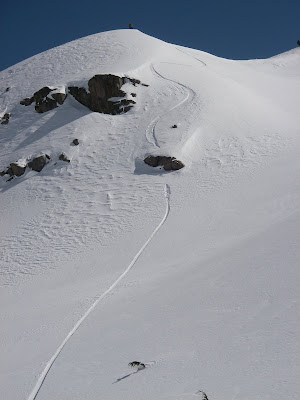 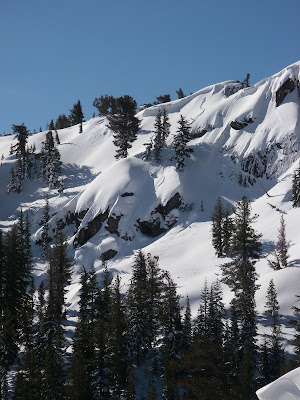 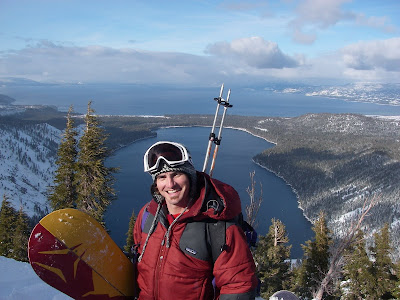 For some more photos and stories, here's a little end of winter post from Patagonia's blog, the Cleanest Line.  When it comes to snowboarding, I'm always looking for the cleanest line. There's some more shots of some of my favorite lines in the post.   Also lots of other great outdoor and conservation info in the blog too.  Take a minute to check it out.
http://www.thecleanestline.com/2009/05/from-white-lines-to-tight-lines-with-mikey-weir.html#more
Posted by Burl Productions at 9:36 PM 1 comment: