O.A.R.S. - Rafting for Conservation from Mikey Wier on Vimeo.

This summer, veteran rafting outfitter O.A.R.S. has donated six fully outfitted rafting trips over the course of two days down the Mokelumne River on the border between Calaveras and Amador counties in the Sierra Nevada Foothills.  To date, the Angels Camp-based organization has helped raise nearly $10,000 to help fund the Foothill Conservancy and their efforts to support National Wild and Scenic River designation for the Mokelumne River.

The Foothill Conservancy’s mission is to protect, restore, and sustain the natural and human environment in Amador and Calaveras counties for the benefit of current and future generations. Currently, the greatest threat to the area is an East Bay Municipal District (EBMUD) plan to expand Pardee Reservoir – which would inundate some of the river – destroying a popular whitewater run and flooding some of the best riparian habitat left on the lower reaches of the Mokelumne.

To prevent this from happening O.A.R.S. and the Foothill Conservancy hope that you will join the growing list of businesses, organizations, and individuals who support National Wild and Scenic River designation for the Mokelumne River.

Add your name to the support list today at www.foothillconservancy.org! 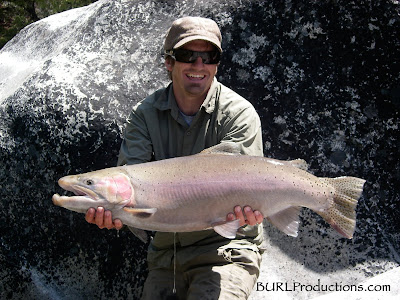 Dams suck. But in some instances they have created a condition where the water is the right temperature that Trout can mingle with Largemouth and Smallmouth Bass, Catfish, Squawfish, perch and Carp.  These situations can make for some interesting fishing.  Tonight i watched a trout pull a full on smash and grab on a school of small bass.  It was right in front of a bait fisherman with a ball of power bait out.  The trout swam right past his bait to ram the tiny bass.  It looked like a basking shark swooping through a wad of krill.  Then we watched some huge carp jump.  Then we got some large and small mouth to come up and smash poppers.  That's pretty cool.  I really needed to catch a bass after the beating Mike O'Dell, Derek Rust and I sustained the other night on lake oroville.  Mike O'Dell Quote about the hike out up a 60 degree scree slope, "When i had to grab handfuls of star thistle too keep from falling back, that was the only part where i thought for a second i might die." 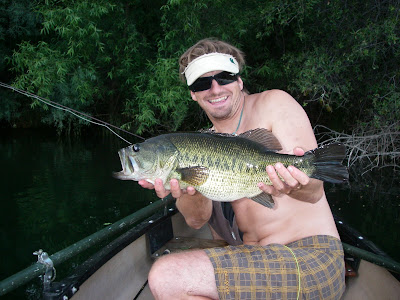 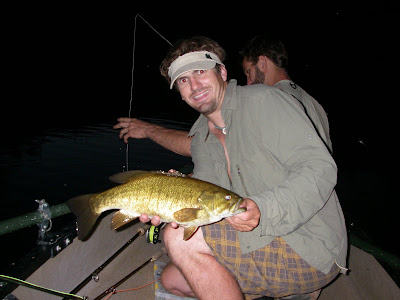 Small mouth harder to lip.
Posted by Burl Productions at 2:16 AM No comments: 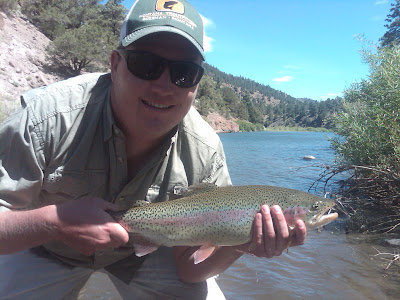 On Sunday every guide working for the Tahoe Fly Fishing outfitters was assigned to guide a wedding party.  We were scheduled to meet 23 people at 7 in the morning for a half day guide trip.  I was assigned to hike down into the canyon of the carson on one of the steepest trails around.  Jeff Babbitt and I got the three guys with "Fishing Experience".  They said they were up for a walk so we agreed to take them to the real waters.  Turned out they were all pretty hung over from the night before.  Like good wedding party guest should be.  After some huffing and puffing i decided to take my client for a walk up stream so Jeff could have the two killer runs near the end of the trial.  Decision paid off for Louis Gendle from Montana.  In just a couple hours of fishing he got 4 fish on dries and two on nymphs including this monster bow with great colors and nice orange fins.  Wish we got to see the one that broke off.
Posted by Burl Productions at 2:04 AM 2 comments: Joe Snyder with an East Carson Brown.   Pressure was off when he got a killer brown on his second cast.  Moments like that, i love my job. 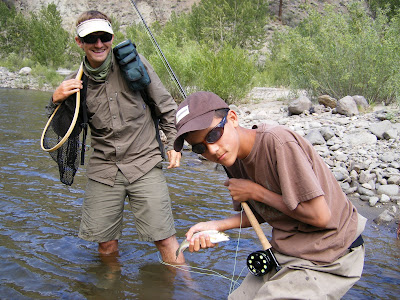 We had a great day on the river.  Getting lunch in Marleeville was a bit tough though.  It was Saturday of the Death ride.  On this weekend 3000 crazy road cyclist descend into this area to ride five passes and over 100 miles in one day.  The very small town of Marleeville looks like the Tour de France for this one day of the  year.  In town the streets were lined with people ringing cow bells and shouting at the riders as they went by.  Once down on the river though, all the commotion falls away.  The beautiful scenery was interrupted only occasionally by a mass of florescent colors and spandex wizzing by on the road above. 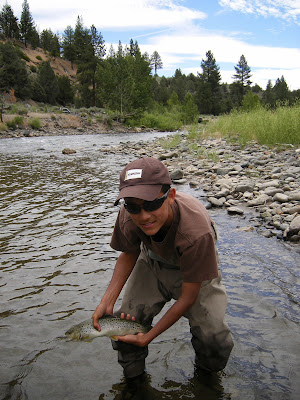 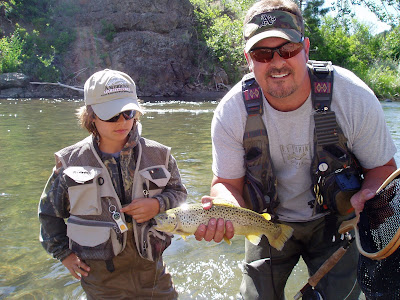 After several drifts from the side, Rob Horgas changed to a straight up stream presentation.  This brown came up and grabbed the hoppicator first drift.  Great visuals.  I thought for sure he was going to take the dropper. 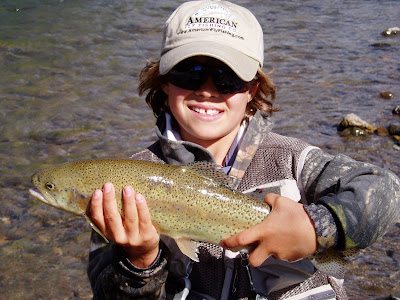 At 8, Ryan's got the grip and grin down. 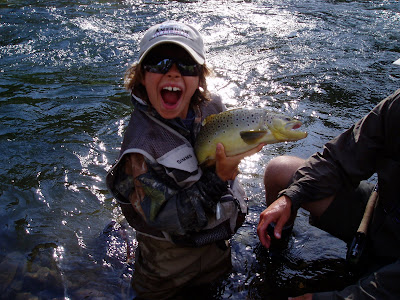 The first time i ever fished with Ryan and he got a nice 13 inch rainbow on the second cast.   Made the cast, i helped a bit with the hook set, and he fought it in.  I knew it was going to be a good day.  Ryan really wanted to fish where Loren Elliott fished in FISH EYE 3. 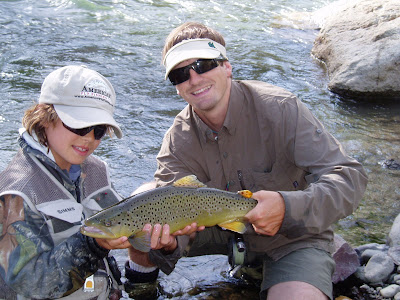 He wants to be a professional fisherman when he grows up.  He also wants to drive a Monster Truck around to all the good fishing spots.  He could become the youngest pro BASS CAR driver.
Posted by Burl Productions at 12:39 AM No comments: 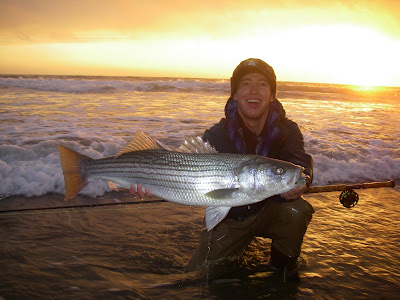 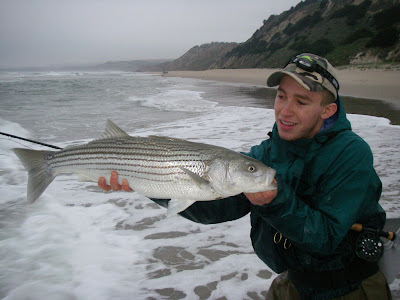 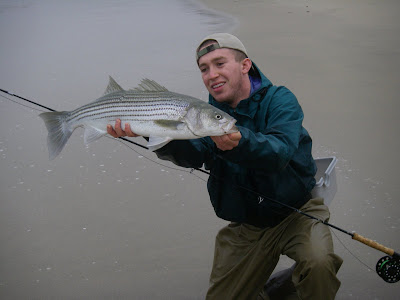 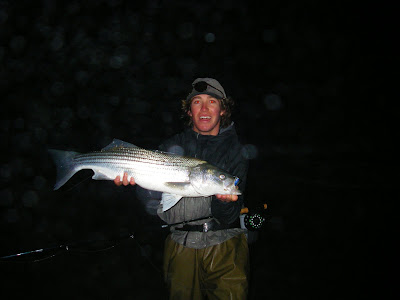 A seldom taped into resource for California Fly Fisherman is the sometimes awesome, most of the time frustrating surf fishing potential for Striped Bass.   On his days off of working at Western Sports, Loren Elliott has been out chasing the stripes from some of the beaches both north and south of the golden gate.  With many days not even touching a fish, it's a hard game of paitence and reward.  All Loren's time spent and hard work pays off once in a while.  He got the top fish last night.  On a day last week, Loren pulled 3 nice stripers out before 10a.m.  He asserted that it was his best day yet.  Check out the popper caught fish on the bottom from another of his outings.  It's possible.
Posted by Burl Productions at 8:57 PM 3 comments:

Fished the East Carson Fathers day weekend with Loren and Doug Elliott.  We had a great day to say the least.  It had been a couple years since we had last fished the high sierra's together. Both Loren and Doug whaped some nice bows on the carson.  The highlight was a solid 20 incher coming up and grabbing the hoppicator.  Loren set the hook and landed him.  It was super fun to watch.  Water was high still and just coming into shape.  It also happened to be Doug's Birthday and he was rewarded with a killer 24 inch bow. 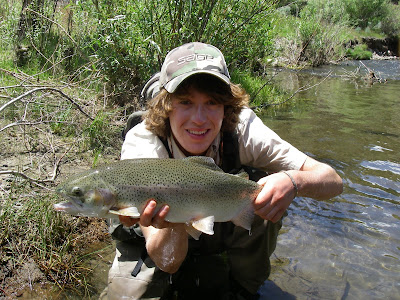 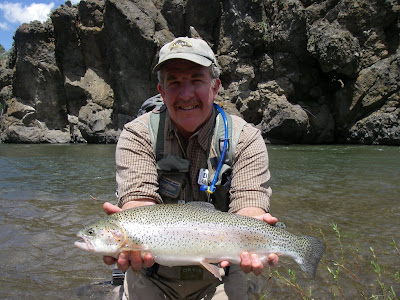