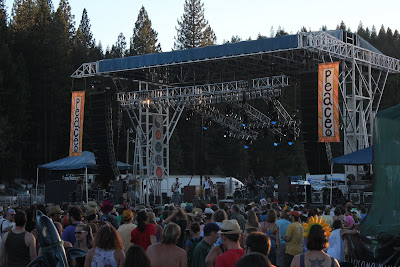 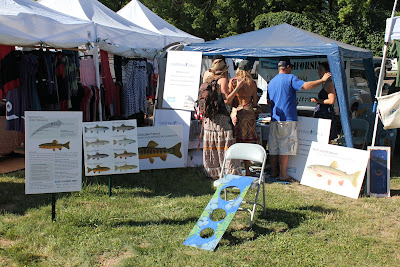 This year i helped work the Cal Trout booth with the wonderful Shannon Moon. 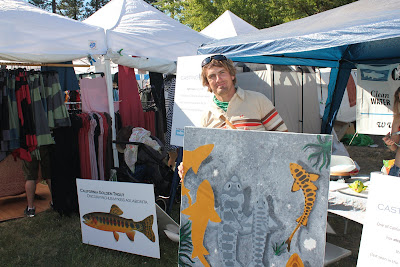 We had some interactive games for the kids including some painting. I brought some canvas and donated some paints to the cause. Also worked on one of my own paintings of some leopard sharks throughout the weekend. 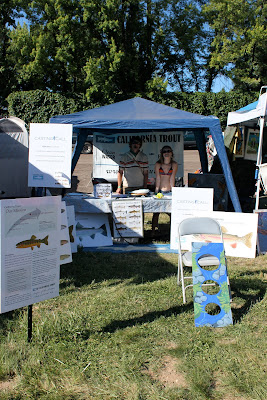 Holding down the fort.
Posted by Burl Productions at 8:02 PM 2 comments:

Some photos and a report from my friends Craig Smith and Jonathan Boulton's recent trip to Merchison Falls in Uganda. Might be the biggest Nile Perch ever caught there on fly. 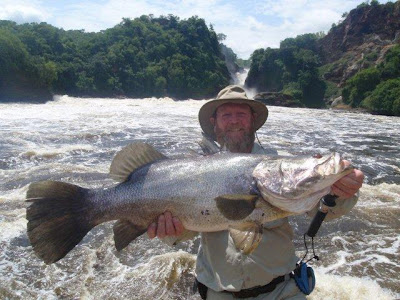 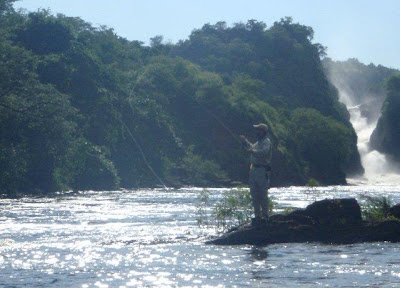 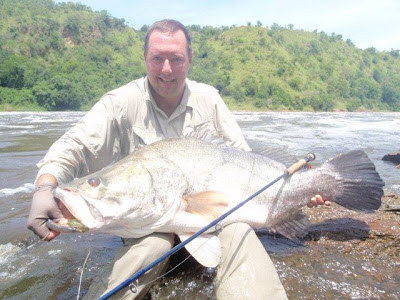 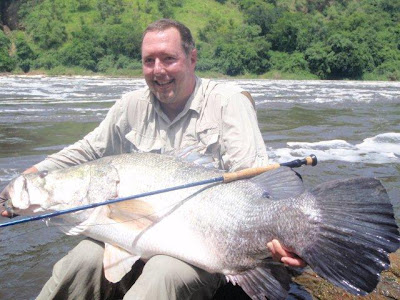 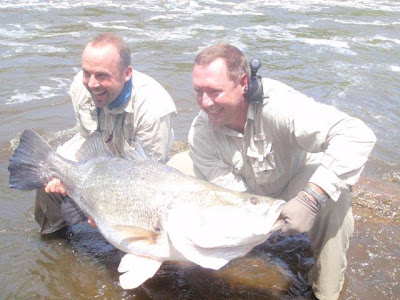 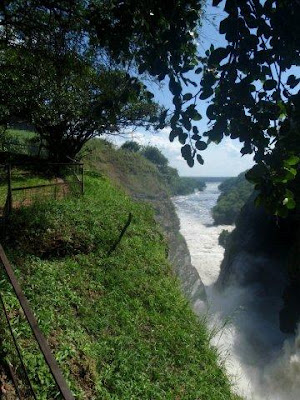 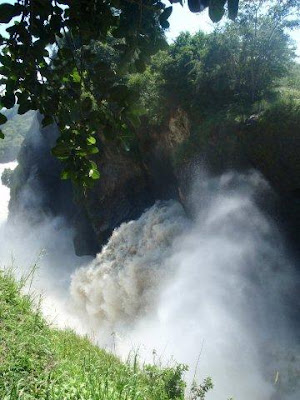 Hi Guys - Don't want to bore you with too many details.
Just got back from a trip to the Murchison Falls in Uganda. It is a
fascinating rift valley where over millions of years some of the rivers have
changed the direction the used to flow in. It is rich in culture - Ernest
Hemingway, Winston Churchill, Franklin Roosevelt and Queen Elizabeth have
all hunted there. It was a real adventure as few people have fly fished this
area. It was hot - over 40 degrees in the gorge, humidity was 100%, the
river pumps, tsetse flies were all over you all day, hungry crocs, hippos,
snakes, colobus monkeys, etc. We stayed at the Red Chilli backpackers where
we were fed bacon with nearly every meal. The accommodation was really
sparse and the ablutions were shared by over 50 people. But, the beer was
always cold and plentiful.
Jonathan checked my equipment every evening replacing broken lines and
retying all my knots. We fished at the bottom of the falls at the start of
each day. The Victoria Nile is channelled into a gap of 6 meters and drops
down 40 metres spilling 300 cubic meters of water a second - not sure what
that is in feet. I fished hard about 8 hours a day for 6 days and landed a
total of 4 Nile Perch. One of these happens to be the new recorded record on
fly - 25kg's. It fought me for about 35 minutes (with a lot of instructions
being shouted by Joanthan - I think he panicked for me) on a 10 weight rod -
I did not know fly rods could handle that amount of punishment. Length 1.23m
and girth of 82 cm's.
Our guide was the renowned wildlife expert Paul Goldring who was fascinating
and taught us a lot about the bush. He also showed us a lot of unusual
things we would never have seen if we had been on our own - for example:
fresh leopard tracks on a path we had walked on the day before, a royal
python in the papyrus (something he said we would never see in our lives
again - he has picked up a dead one which he has in a jar in his house, and
then the one we saw with him). The rocks you see us flyfishing from always
had crocs on them and we had to chase them away to get a spot.
We also experienced the true Africa in Kampala where we had to bribe a local
traffic officer for an alleged offense - even having to give him 2000
shillings for his taxi ride back to his post after he had fleeced us for 60
000 shillings. I loved his response - either put up with it or leave - this
from Paul, not the policeman. He was not planning to leave.
Craig Smith
Posted by Burl Productions at 9:44 PM 4 comments: